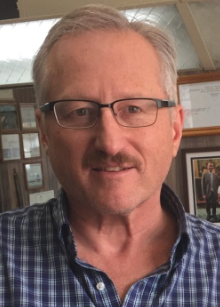 Bill passed away from a chronic heart condition at his Troy, Michigan residence while diligently following coronavirus sheltering in place protocols. He is survived by his father Robert Capo and wife Marcia, his brother Jim Capo and wife Machiko and their two sons Alex and Max, his stepbrother Dan Miller and wife Tracee and their children Frances Rose and Hollis and his stepsister Cristina Kruger. He is also survived by his cousins and relatives in the Capo, Shubnell and Wojtkowski families.

Bill loved being with everyone at family celebrations. Throughout his life he appreciated the support and love he received from both his own family members as well as members of the Harrington and Aylesworth families who he remained in contact with since the days of his youth. As his nephews and niece can attest, Bill was known for his sense of humor that was embellished by his fisherman’s disposition to weave in a tall tale for the entertainment of all. In recent years Bill had transferred his skills as an humorist to hilarious email commentaries ranging on subjects from the absolute correct price of Telsa stock and Bitcoin (somewhere near zero) to who are the greatest legends of Rock and Hockeydom (with only Red Wings players in the running for the latter). He also enjoyed studying his family’s connection to the Polar Bear Expedition of 1918-1919. Bill was a caring person who was knowledgeable about a wide range of subjects, which helped him in his occupation as a professional pharmacist and being the family go to person for all things pharmacological.

As is usually the case when someone dies before their time, we will reflect on the conversations we looked forward to have with Bill but suddenly will no longer be able to experience. Bill’s wishes would be that we transfer those thoughts and conversations to those around us in a kind and loving way.

The family will have a memorial service for Bill later this summer. Per his wishes, Bill’s ashes will be interred next to his mother Stella Capo nee Wojtkowski at White Chapel Cemetery in Troy.