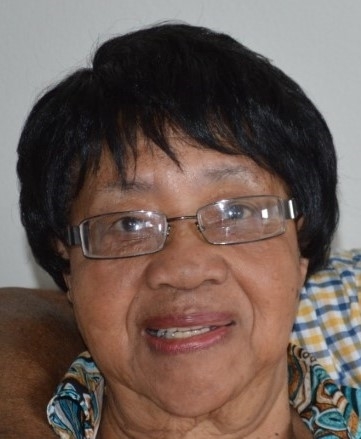 Earlene Hall, affectionately known as ‘Earl’ was the oldest of 8 children born to Charlie Moore and Oneida Parker Moore in Idabel, Oklahoma. After brief stays in Dirks, Arkansas and Kansas City, Missouri the family settled in Detroit, Michigan in 1939 where she attended Detroit Public Schools.

Early motherhood led her to work various jobs which included a car hop at a drive-in diner, dishwasher, food preparer, a domestic housekeeper and cook. In 1963, she found permanent employment with Irving’s Gift Shop on the Avenue of Fashion as a gift wrapper. She was eventually promoted to sales where she was successful in selling high-end furnishings, unique home décor and jewelry. The store closed in 1992 leading to her retirement.

Earlene met the love of her life Henry Hall in 1972 and after an extended courtship they married in 1978. He wanted to move to Texas and build her a house from the ground up. She seriously considered the idea and went as far as designing a floor plan. But thoughts of being so far from family changed her mind and they decided to stay in Detroit.

Cooking was one of her passions. Creating holiday dinners and particularly Christmas was special to her. The table had to be set exactly right with gold rimmed dinner plates, gold silverware and matching glasses. The food was second to none! Other interests included reading novels and completing crossword puzzles in ink. She challenged herself by utilizing both a traditional and a crossword puzzle dictionary to expand her vocabulary.

After the passing of Henry in 1999 and several years alone in the house they shared she decided it was too big to manage. She moved to Royal Oak Towers in 2008. While living there she developed a friendship with the floor captain Ralph Davis who later became her companion.

To Those I Love
My time has come, let me go
So I can move into my afterglow.

You mustn’t tie me down with tears,
Be happy that we had so many years.

I gave you my love, you can only guess
How much you gave me in happiness

I thank you for the love you’ve shown,
But now it’s time I traveled alone.

So grieve for me, if you must
Then let your grief be comforted with trust.

It’s only for awhile that we will part,
So thank God for memories within your heart.

And, when YOU must come this way alone,
I’ll greet you with a smile and say, “Welcome Home!”

A private graveside service will be held at the Greats Lakes National Cemetery, Holly Michigan.

A Celebration in her honor will be held a later date.